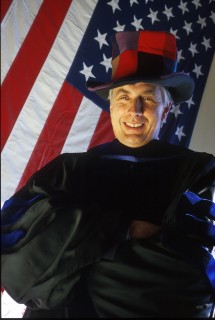 Dr. America is the curator of the magnificent (but wholly imaginary) American Studies Museum at St. Olaf College.  For six years, he conducted weekly radio tours of the museum’s collection, exploring the facts and artifacts of American life on WCAL.

The American Studies Museum is as large as the imagination, containing object lessons derived from objects as diverse as Pampers and airline peanuts.  Its Home and Garden Show displays virtually all of the items that make a museum of every American domicile.  The museum’s Fashion Wing includes clothes—like Hard Rock Café T-shirts—but also such epiphenomena as mannequins and suntans. The Knickknack Corner includes items like Beanie Babies and McMemories.  The Museum’s fully operational Supermarket includes a complete collection of foodstuffs and other stuffs—like deodorant and toothpaste and toilet paper—that can be found in the miles of American market aisles.  Its Mall of Minnesota is jam-packed with the evidence contained in the average shopping center.  The Automotive Wing contains cars and trucks and sport-utility vehicles, as well as parking places and such accessories as radar detectors.  The Food Court serves everything from fast food to sloe gin.  Ads—one of the most important measures of the American mind—are distributed throughout the collection. The Bumpersticker and Billboard Wing contains kernels of American philosophy like “Shit Happens” and “Life is a Journey. Enjoy the Ride.” And, of course, the Audiovisual Archive contains copies of every movie, television show, and computer display ever shown in the country.

Dr. America, who is interested in everything and in nothing else, could help listeners understand the moral ecology of everyday life.  In his tours of the American Studies Museum, the good  doctor works against what Leslie Prosterman calls “the law of inverse importance,” which generally requires academics to write most about things that most people don’t do.  Dr. America, on the other hand, is intensely interested in the significance of the insignificant, making the familiar unfamiliar and vice versa.  Sometimes he provides what Elizabeth Minnich calls “blinding flashes of the obvious;” on other tours, he probes deeply into the underlying ideas and institutions of American life.  In either case, by exploring the meanings of the material world, he complexifies our culture, and helps us to see why we act like Americans.

Although he is a professor, Dr. America—who has a Ph.D. in American Culture from the University of Middle Minnesota—is no pedant.    His tours are often enlivened by personal stories, when Mrs. America and their all-American children guide him to a better of understanding of his own behavior.  Too, Dr. America  believes that it’s hard to be really serious without a smile, and that humor is an essential element of our humanity.  In his tours, therefore, he mixes the play of ideas and the play of words, evoking both laughter and the sort of amusement that leads to musing.