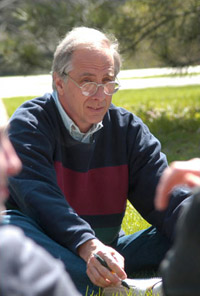 Jim Farrell is Professor of History, American Studies, Environmental Studies and American Conversations at St. Olaf College. As an interdisciplinary scholar and teacher, Jim’s teaching has been weird, if not innovative, including courses on Environmental History, Consumer History, The Mall of America, Nuclear Weapons and American Culture, Walt Disney’s America, Consuming College Culture, and Campus Ecology.  Despite this record, Jim was chosen as St. Olaf’s first Boldt Distinguished Teaching Professor in the Humanities, proving that Norwegians have a rich and refined sense of humor.  At the end of the millennium, Jim chaired the committee that wrote St. Olaf 2000: Identity and Mission for the 21st Century.  As “John Cummins,” Jim performs a one-man Chautauqua show based on the life of a nineteenth-century Minnesota pioneer.  As “Dr. America,” he was also curator of the magnificent (but wholly imaginary) American Studies Museum on public radio station WCAL.

Recently, as an active member of the St. Olaf’s Sustainability Task Force, he’s had a hand in the greening of St. Olaf. He wrote the first environmental review for the college task force, as well as St. Olaf’s Sustainability Principles, and he prepared most of the stuff for the college’s black & gold & green website. With colleagues from Carleton College, Jim has planned summer sustainability workshops called “Cows, Colleges and Curriculum.” on both campuses. With colleagues from the Associated Colleges of the Midwest, he helped put on a June 2010 workshop at Luther College on sustainability across the curriculum. In August of 2010, he addressed the opening faculty and staff meeting of the College of St. Benedict and St. John’s University on “The Nature of Our Lives: Sustainability and College Culture.” At the St. John’s symposium on happiness in September 2010, Jim spoke on “College Fun and the Pursuit of Happiness.”  And in April 2011, he’ll give the keynote address for the second session of the sustainability workshop at Luther College.

He’s also been an engaged member of the Association for the Advancement of Sustainability in Higher Education (AASHE), speaking at all of the AASHE conferences so far. In February 2010, he participated in AASHE’s Curriculum Summit, and he continues to speak and facilitate workshops at colleges across the Upper Midwest.

Before The Nature of College, his books include Inventing the American Way of Death 1830-1920 (Temple University Press, 1980),  The Nuclear Devil’s Dictionary (Usonia Press, 1985), The Spirit of the Sixties: Making Postwar Radicalism (Routledge, 1997);  One Nation Under Goods: Malls and the Seductions of American Shopping (Smithsonian, 2003).